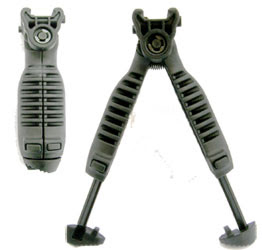 The Mako Group T-Pod expandable bi-pod/vertical M-4 grip, at first blush, seems to be a very useful tool. Right from the beginning, I noticed that in the closed position, this product fit my hand much better than the issued vertical grip, which is manufactured by Knight’s Armament.

The T-Pod was very easy to install, and remained secure throughout my test. When used as a vertical grip, the T-pod suits me well. It is large enough to fit my hands, and didn’t slip at all. In this capacity I give it good marks.

When used as a bi-pod, the T-Pod is a very stable platform, but there, my kudos come to an end. As I said, the T-Pod is useful and stable as a vertical grip and in the open position, but the problems for this item begin when transitioning from one use to the other. The T-Pod is difficult to get into operation because you have two push two buttons to open it and extend the spring-loaded legs. The fact that the two buttons are close together helps some, but even with my big hands, I had to do some manipulating to get them open at the same time.

Once in the open position, the shooter isn’t able to use the grip itself, since it splits down the middle. In this configuration, the shooter must either grip one half of the open bi-pod or the front hand-guard of the rifle.

Another problem with this item occurs when the shooter transitions from the Bi-Pod configuration back to the vertical grip. In order to close the Bi-Pod, the shooter must squeeze the split parts together (being careful not to pinch the palm of the hand), then push both buttons, and press the legs against some sort of hard object to get them to load back into the grip.

If you were using this product for varmint hunting, I think it would serve just fine, but tactically, I don’t particularly care for it.
Posted by Gunfighter at 9:29 AM

Gunfighter
Prince William County, Northern Virginia, United States
I'm a husband, a father, a Sunday School teacher, a servant of God's church, a lawman, an aspiring novelist, a blogger with really cool friends, a helper of those in need, and an unapologetic, tattooed political centrist.